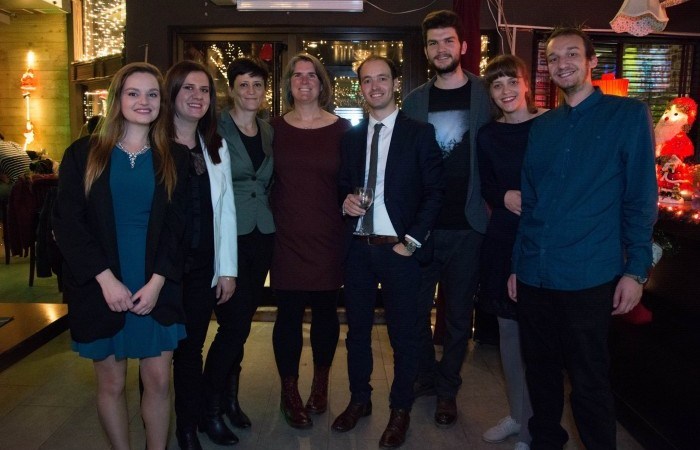 After a 365-day period with a rah-rah and very energetic team IPKO Foundation ended the year 2015 with a brunch of prosperous and very productive projects and most importantly with a very positive spirit.
Was it a tiring year?  Was it a stressful one?  Was it a victorious one?  Was it worth it? Oh hell yes! The year flies and when the end comes, you ask yourself did we really came this far? And that minute you realize how awesome it was to not give up and give the maximum!

But how was 2015 in general for IPKO Foundation?

Let’s do a little throwback:

More than 120 young and enthusiastic people from Kukës, Has, and Tropoja were part of the Wiki Academy Kukes and wrote around 30 new articles about the Kukës region, which were posted on Wikipedia. In the same time, 98 photographers posted more than 1450 pictures in Wikimedia Commons as part of the photo contest of the Academy.

In Next Generation Scholarships Program out of 200 applications that we have received, there were 14 winners this year coming from various universities, who joined in the outstanding family of 138 IF scholars.

An event for creativity, engineering, and innovation, DOKU:TECH included a multi-track conference, workshops, musical acts and a general networking event. During the two days of the conference, 10 talks, 4 workshop discussions and 14 workshops were held, with more than 800 people attending.

This year, RobotiKS was a “meeting” of enthusiasts, innovators, and hardworking youngsters who for five days were committed to create LEGO Robots by using their imagination and a little bit of guidance!

Furthermore, IPKO Foundation in cooperation with USAID’s Basic Education Program, Girls Coding Kosova, and BoneVet Makerspace organized the Girls and Technology event, with the motto of the program ”21st Century Skills.” The major aim of this annual activity was to inspire girls to enter the fields of computer science, engineering fields and technology.

Last but not least,  “A Violence Free Future” was unveiled in several municipalities in Kosovo and aimed to provide youth and leaders with diverse tools to both promote understanding between ethnic and gender groups as well as to counter the radicalization which is slowly taking root in the country.

With your support, we are now moving into the New Year and we usually take this opportunity to reflect on ourselves and take stock of how we have been doing. Life is a progression of normal and unconstrained changes. IF wishes you a new year filled with adoration, happiness, warmth, and cheer with the hope that 2016 will bring us new inspirational ideas and projects with efficient results.