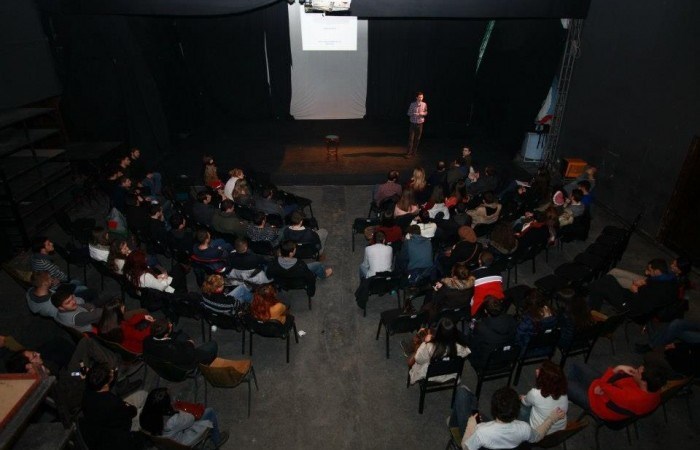 Arianit Dobroshi, Bernard Nikaj and Benjamin Murran were the key guest speakers on the 9th edition of Barcamp Prishtina. Inspirable speeches were those which made this organization one of the best of its kind that can easily be compared with TED conferences. More than 70 people attended this event which for the fourth time was held in the Oda Theatre.

Arianit Dobroshi from FLOSSK presented details about Wikicamp, a project that will be organized on the beginning of the next year by IPKO Foundation with the support of Ministry of Foreign Affairs. Speaking about this project, Dobroshi highlighted the importance of participation on this event by giving contribution for qualitative content of Wikipedia’s information on Kosovo.  He explained thoroughly the idea of Wiki Academy, what it is about, how people can participate, what they can expect, and why it is being done. “It’s intended to give an opportunity for Wikicamp’s participants to publish their high level topics, academic styled, and in addition reward them”, Dobroshi said. He continued his speech discussing with participants and motivating them to give their contribution on creating contents for Kosova. Answering on the questions from the audience related with the actual articles written mostly by Serbs, and why they should write articles that can easily be deleted or edited by them, Arianit said: “When there’s a debate between A and B and there’s an absence of A, than B wins. If we don’t stay aside than we have a chance to improve the online content for Kosovo.”

Professor at FIEK and Counselor at the Ministry of Trade and Finance, Bernard Nikaj separated his presentation in two different directions. In the first part, he talked about his involvement in Wikipedia and course projects. While the second part of his presentation was about the project of including entrepreneurship practical teaching in class. Speaking for that, Nikaj said that our education system is a little bit to be blamed because it is orientated to create worker, not people who are able to learn skills how to start a business and to hire others on their own.

“We also encouraged students to give their contribution for Wikipedia to make it simpler and also to have a different experience from their lectures” Nikaj said, adding that it is important to write and promote the country online.

Ex-EYE (Encouraging Young Entrepreneurs) partner and entrepreneur, Merran talked about entrepreneurship in general. He concentrated his presentation mostly on the emotional and personal side of things in order to engage more with people.

He expressed his impressions for Kosova’s entrepreneurial culture, emphasizing the present gape on this field and his thoughts on it. According to Murran this comes due to the fragile contact with the world outside, but also because people are converted in grant hunters who don’t care, don’t try and are wedged only on their business plans just to get money. “Going out to the square and acting like sunglasses vendor who works for trading is the activity I recommend. Only for two minutes you started your own business. You are free to sale and to see how it is to lead. But if you were in France you would be imprisoned. You can’t find such a freedom anywhere in world. Why don’t you utilize it? People asked me why I returned. Why I left France to live in Kosova? But what I see here is that people are happy but they simply don’t know it. There’s a tremendously space to crate anything in here, while in France people are desperate, have everything and they visit psychologist everyday just because they are not motivated. Open your eyes and use that what you have.”