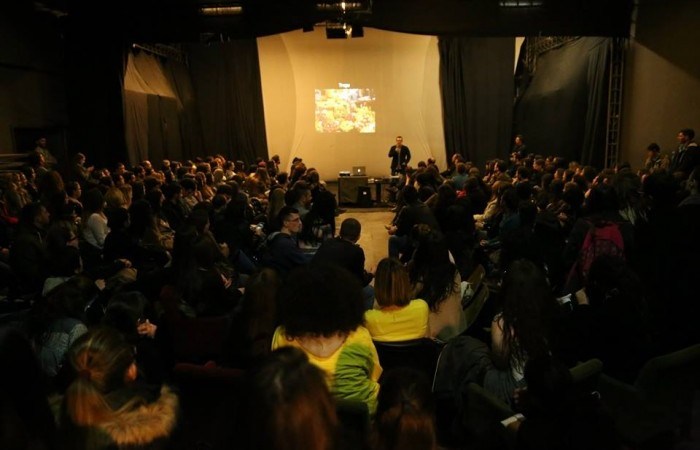 A record-breaking edition of BarCamp Prishtina was held this Tuesday!

The twenty-ninth edition of BarCamp Prishtina brought three speakers with interesting stories about their journeys in life and the obstacles they have found in their respective professions, thus spurring discussions about social phenomena encountered in Kosovo. As usual, BarCamp tried to instill innovation and inspire the audience by offering them inspiring stories and generating debates in regards to any topic.

Three speakers were invited in this edition of BarCamp Prishtina, consisting of Gani Bajraktari, Lirie Lokaj, and Fitim Uka. Personal stories were shared, thereby establishing a close relationship with the audience, which interacted and returned the favor!

As usual, this edition of BarCamp took place at the Oda Theatre, an area that provided a decent environment, where the participants could gather, socialize, listen to speeches, and share ideas. Each talk and discussion ensured that the participants’ minds remained engaged, while free fresh drinks kept the former receptive to ideas and thrilling discussions.

This BarCamp had a record-breaking participation, as there were over 300 registered participants eager to listen to inspiring stories and share their own thoughts in different issues raised. Thus, it was nice to see that the interest was extremely high, as it aids our attempts of increasing our BarCamp community and provide them with opportunities of personal and professional growth, as well as serve the objective of BarCamp by inspiring them to take on ideas and implement them.

Gani Bajraktari, PhD, Doctor of Medical Science, Associate Professor in the Faculty of Medicine at the University of Prishtina, former Director of Internal Clinic at the University Clinical Centre of Kosovo, former Dean of the Faculty of Medicine at the University of Prishtina, talked about his life experiences in a chronological way, starting from when he was a student. He explained to the audience that, nowadays, it is much easier to be successful and reach one’s life goals because of the emergence of the internet, which transformed the planet into a so-called “small village.” Prof. Bajraktari put an emphasis on the importance of constantly pursuing one’s life goals. Only if you try hard and not give up, you will reach the highest peak in your life.

Lirie Lokaj, a psychologist, co-founder of the first Clinic of Clinical Psychology in Kosovo “UNI,” who also offers counseling at www.nukjevet.net, a platform where psychologists voluntarily provide online counseling for the users of the website. She started her speech at BarCamp with a very emotional story about her life, and shared some of her personal experiences as one of experts of Nukjevet.net platform, along with her recent activity in the psychologial center “UNI.” Lirie emphasized that “in life, it is important to express your feelings no matter how hard it is, because we can sometimes be very complicated human beings.”

Fitim Uka, a psychologist who aims to study the intelligence of children and their self-regulating skills, who tried out several professions in the fields of journalism, sport, art, business, until he decided to follow the path of psychology. With a characteristic humor, Fitim shared the obstacles, as well as the success, he encountered during his life. After finding himself in a crossroad of different professions, Fitim made sure to identify each path as an experience, rather than a waste. As he mentioned, “every job is good, while it brings the reward for the sweat and effort put in.” With each step of his journey, he inspired the participants to think in a positive mindset, as even though one might think that s/he has reached the bottom, it is in fact the beginning of it all!

The audience was very interactive and discussions were raised on social phenomena such as the concept of virginity and how a psychologist deals with patients and the sensitive information they receive from the ones who require consulting.

See you soon in BarCamp Prishtina #30.