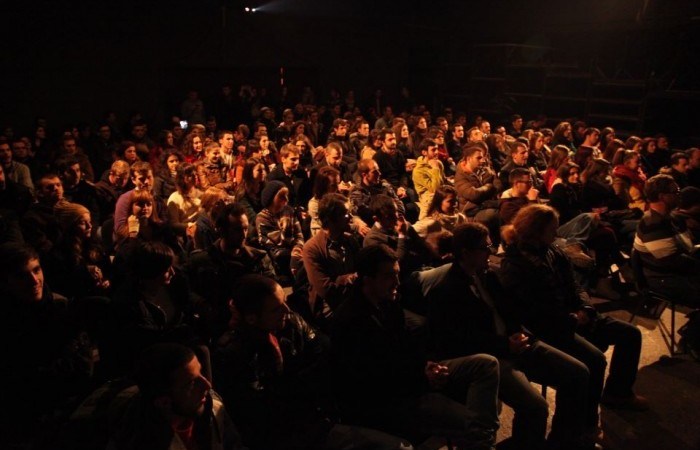 There were not enough chairs at Oda Theatre for all the people who participated the tenth edition of BarCamp. More than two hundred people attended this event, which also included the Speedgeeking, a pre- event of Wiki Academy Kosovo. During the Speegeeking the potential participants of Wiki Academy Kosovo had the opportunity to meet each other, discuss their ideas, and create teams. Just after that, the transformed Oda’s hall seemed too small to fill the number of people who attended the event. The co-founders of Crème de la Crème, and TekFuze were the guests for this evening. They shared with the audience their personal and professional life, which aroused the curiosity of people and made them get involved in the discussion section.

Guri Shkodra, Faton Hasani, and Dren Ukmata had an attractive presentation on the BarCamp’s stage. Shkodra took the lead and spoke more for his experience in Spark, and also about the idea behind the creation of Crème de la Crème bar, which is considered to be unique in Prishtina. “We were spending a lot of money while going out for fun, and one day we thought that it would be better if we create a place where we can spend our money and time together. We decided to create something that resembles the ordinary “templates” of businesses in Kosovo, but however now we are different”, said Shkodra. According to him, what make Crème de la Crème unique are the attractiveness on music and the way they use to approach clients. Answering the questions from the audience on how they can deal with different activities, Shkodra said: “He who has the will, can do anything. If you have the will, you can engage in three or more activities and succeed.”

Glen Nobel was the second speaker of the evening. He spoke about the Genesis Technology Centre establishment, and also about the initiative to establish a business in the electronic industry called Tekfuze. “The beginning of a business like this is not easy. That’s because the faculties in Prishtina are focused more in theory than in practice. However, diligently, I think that we are able to bring innovation in the West European and American market”, he said, adding that now they are able to create 300 new jobs.

Medial sponsor of this BarCamp were Telegrafi.com and Digjitale.com. For further details please see the link https://www.facebook.com/BarCampPrishtina and Twitter: #bcprn.