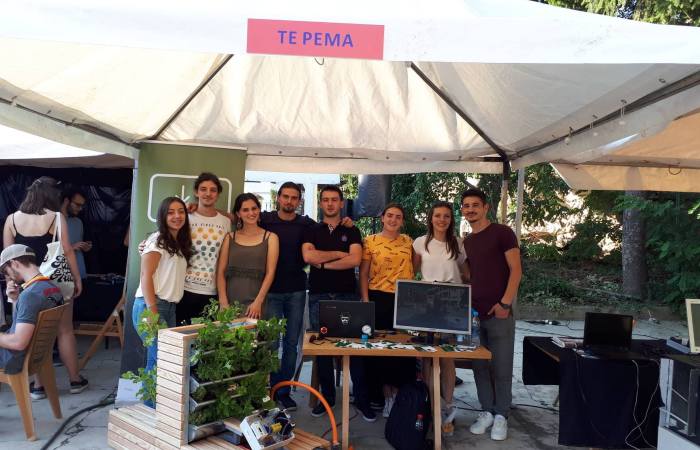 I am Dion Deva, co-founder of “TE Pema”, and I have applied at IPKO Foundation for the 500€ grant. This grant is used for the construction of the irrigation system (drip irrigation) in the project called TE Pema. “TE Pema” is a project aimed at improving the quality of air and awareness of the air pollution in our country, respectively in the capital city of Kosovo, Prishtina. Based on the latest data it is known that Kosovo is one of the members of the group of countries that have the most polluted air. Knowing this fact, we as students of the Technical Faculty have decided to create a product for the benefit of air. The drip irrigation system is very useful in agriculture. This system was patented by Gordon E. Atkinson Kenneth C. Tregillus. The drip irrigation system functions in this way:

The main pipe which is usually connected to the sink makes the transportation of fluid through the pipe ring and has a diameter larger than the diameter of the pipe network. The "drip irrigation” system is commonly used for horizontal surfaces but in our case, it is used for vertical surfaces. The main elements that make up the “drip irrigation” system are pipes, connectors, fluid flow holes, and pressure regulators. In this case, the “drip irrigation”  system will be connected to the pump which is programmed via the PLC microcontroller and as a result, we have automated irrigation. To have maximum performance for air purification, the irrigation is done automatically within the system (drip irrigation) according to the needs of the plants. According to the calculations, we have shown, a single product “TE Pema” is equivalent to about 70 small trees. The plants are used in maximum, as well as air circulation increases due to the structure and plant placement. If the same plants were on the flat surface, the same effect would not be achieved. The product TE Pema collects water from the precipitation, which it filters and with that water is filled the reservoir, from the filled tank, the automatic pump sends the water to the plants. Also, the tank is manually filled when there is no rainfall. Awareness about air pollution and the consequences of air pollution is the success we are aiming for. For this, we need help and cooperation. The first prototype TE Pema was initially located in the technical faculty, then the municipality provided us with space in the Zahir Pajaziti square, where it is currently located. TE Pema is functioning very well and the municipality of Prishtina has decided to build also other TE Pema in different places of the Prishtina.

Working with IPKO Foundation has enabled effective cooperation that led to very good results. IPKO Foundation has also made our participation in DOKUTECH possible, as part of the DIY Fair. At the DIY Fair, we presented the mini model mini TE Pema. On behalf of the group, I would like to thank the staff of the IPKO foundation and hope that other collaborations will happen in the future.