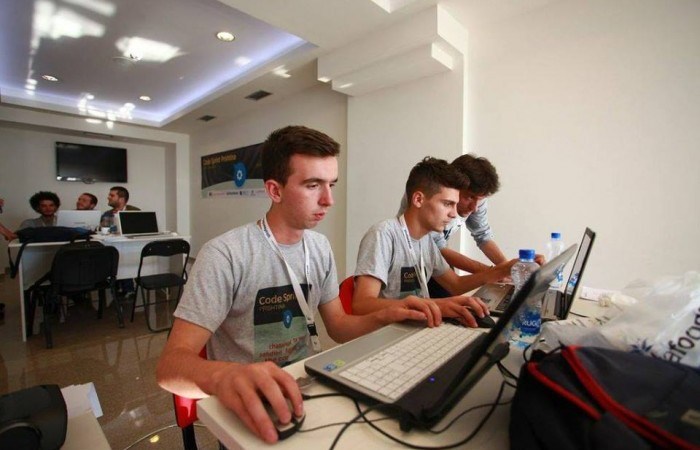 Increase your personal values and help others

Born in a small village, called Gllobocica in the city of Kacanik most of my life I have lived in Gllobocica, then in 2010 I have started high school in Kacanik. I have graduated from high school in June 2013. Now I’m living in Kacanik, and I’m studying computer science in UBT, Prishtina. In high school I have started trying to help people, with a Group of environmentalists, then after that I have started to contribute in an organization called KVRL, in Kacanik, they helped me to share my work as a designer and a developer in exposition in Vushtrria. Then after that, I have heard for a camp called Social Innovation Campthat was organized from UNICEF Innovations Lab, where I was with a project called Eventor, with a mission to help students for events, scholarships and everything else that is for free. After that, I have heard about another camp called Community Boost_r, organized by IPKO Foundation in association with other organizations from Balkan countries. Where I have applied with a project called Stop Smoking, a mission to stop smoking in closed environments, where I was challenged from 6 other projects, but unfortunately my project was not one of three finalists.

When I think about IF, I think for helping people on having a better life and lead them to the right direction.

Wiki Academy is one of the projects that I really appreciate, but I did not have a chance to attend the WikiAcademy, because I was busy at that point of time, but I have participated all the time in Wikipedia, helping IPKO Foundation to win the Internet war against Serbia, because they were online in the most of the time, trying to edit and to remove the new articles from Wiki Academy, but we are staying online, working all the time in Wikipedia, trying to keep in life our articles. I have chosen to be part of Wiki Academy because I have a lot of friends from other countries, and when I have searched something for Kosovo that I want to show to them, I have seen that Kosovo is shown as a part of Serbia and sometimes the articles about Kosovo are so poor but sometimes they were edited by Serbians that they have write something for Kosovo to show Kosovo as a opposite country.

The second project that I love it is DigitalKosovo, I’m participating in this project all the time, helping IF to add Kosovo in the Dropdown list of all websites and institutions, because in the most of websites Kosovo is showed as a part of Serbia, also sometimes when I have tried to buy something from eBay or Amazon, when I put my address, I need it to put it from Serbia, but the product that I buy goes to Belgrade, and all the times, the product is returned back from Belgrade, because they don’t send the post to the address, so we can’t buy something online!

Also I have participated in the DigitalKosovo because I’m an activist online, and I’m a part of a lot of websites, and every time when I have to register in any website I have seen that Kosovo is not in the drop down list in the most of websites. But when I have heard about DigitalKosovo, I was so happy because now there is a website that will help me to add Kosovo in drop down list of every website, and we can show to others that there is a new country with a lot of talented citizens with a task for the future.

I’m happy that IpkoFoundation exists, and I will be part of all IF projects, to increase my personal values and help others, and to have better life in our community.