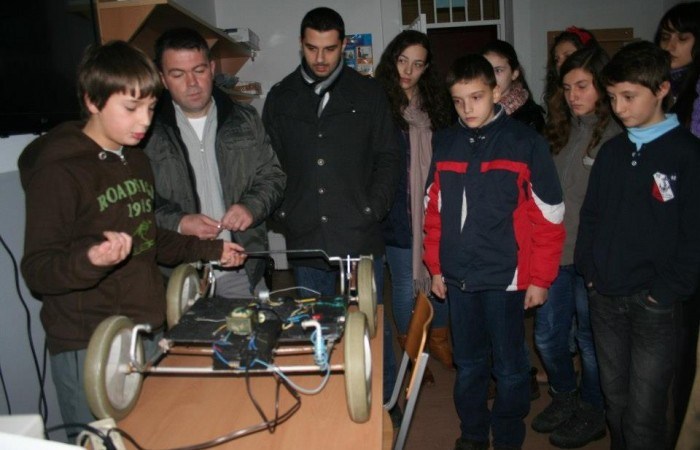 Back to Activities Scholarship

IF Scholars meets “Geeks of Technology” in Elementary schools in Kosovo

The future of Kosovo’s technology is on the right path. This is the conclusion reached after a visit by IPKO Foundation scholars to seven elementary schools in six different cities, where students of different ages showed their passion for technology. Impressed by the enthusiasm and skills that the children of Tech Clubs of these schools showed during the visit, IPKO Scholars returned home with hope for a bright future for technology in Kosova.

The first school visited by the scholars was SHMU II in Vushtri where they met the seventh and eighth grade pupils currently active in the Technology Club. IF scholarship winners did a presentation for pupils where they introduced themselves and their engagement with technology.  Students and and their teachers demonstrated the operations of their LEGO robots and the electronic tiles and circuits built by them.  The students and scholars engaged in discussions about technology and their goals and aspirations for the future.

The second school visited by IPKO Foundation Scholarship Winners was the “Eqrem Çabej” School of Mitrovica in which scholars left impressed by the passion and skills that the students of Tech Club of this school showed during the visit. Pupils spoke about their achievements in technology by demonstrating the operations of the tools they had built. Also, they took advice and answers to their questions by the IPKO Scholars. What makes this club special from other schools is the seriousness and dedication of the pupils to achieve bigger goals related to technology. Some of them, as it was the case with Art, a 12-years-old boy, possess a very advanced knowledge on computer programs and robots. He went so far as to build a robot himself with his own materials.

Scholars continued their tour in Prishtina in “Gjergj Fishta” School. With limited resources and a small classroom the pupils of this school managed to win the third place in a race for the design of technology tools this summer. The students shared a short movie that they filmed using a flip camera, another donation of USAID. Moreover, some of them were very interested to attend training related to robots and computer programs and such a possibility was promised to them by the representative of IPKO Foundation and the IPKO Scholars. This promise was given to all pupils visited during the day.

Pupils of the Tech Club of “Dardania” school excited by the visit showed an eagerness to know more about the experiences of the students visiting them. After briefly showing what their goals were regarding the technology, they listened carefully what the students had to say. Wanting to learn more, they asked a number of questions making the discussion very valuable.

The first visit of second day of the Bus Tour took place in “Halil Bajraktari” School, Drenas, in a comfortable classroom, where the pupils showed their work and their passion for technology. IF scholars had the chance to see how theoretical lessons they took in the past were transformed in excellent practical skills. Pupils also showed their interest in becoming future technologist. Moreover, some of them were willing to attend training related to robots and computer programs.

The IF Scholars continued the Bus Tour in school “Bajram Curri” in Istog where unfortunately because of some technical difficulties and other issues related to infrastructure of the school, the presentation of pupils was impossible. Their new school is going through building construction and they did not have the opportunity to demonstrate their work. However, they had the chance to hear from IPKO Scholars for the possibilities they have in the future and how they can use technology to reach their goal.

The last visit was in elementary school “Zekeria Rexha”  in Gjakove. Pupils, were very well prepared, very organized as a team, and very enthusiastic about meeting IF Scholars. They had prepared a Power Point presentation where they showed their work they did in their Tech Club. The Students Club for Technical Support showed their willingness to deal with different issues related to technology. They demonstrated how their club is organized in three different groups that engaged in three different subjects. The first group of club works only for hardware and software regulation, second group works in network and user maintenance, and the third group works for management. Pupils also showed their interest to deal with different issues related to technology and their commitment to study this field in the future.