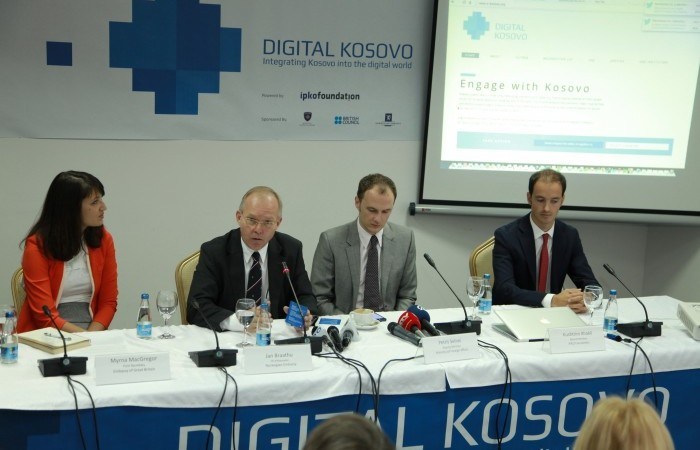 Today’s launch of the Digital Kosovo web portal is an important step forward in addressing some of the challenges faced by the citizens of Kosovo in accessing the full benefits of the Internet. As the Republic of Kosovo continues its work on political recognitions, this new IPKO Foundation initiative launched at Hotel Sirius today is part of a sustained effort to secure greater recognition by the global Internet infrastructure.

The new website www.digitalkosovo.org has been designed and developed by IPKO Foundation, with the backing of the Kosovo Ministry of Foreign Affairs, British Council and Norwegian Embassy, in support of Kosovo’s Digital Diplomacy Strategy.  This new project enables Kosovo citizens to act as digital diplomats and take part in online advocacy themselves.

The Digital Kosovo site was officially launched in a media conference in Prishtina with guests including the Deputy Minister of Foreign Affairs Petrit Selimi, IPKO Foundation Board Member Kushtrim Xhakli, Norwegian Ambassador Jan Braathu, and Myrna Macgregor from the British Embassy.  The launch included a panel discussion on “The Role of Digital Diplomacy online” and was followed by a reception.

While speaking for the role of the online diplomacy, IPKO Foundation Board Member and Internet entrepreneur, Kushtrim Xhakli said: “We are committed to empowering Kosovo citizens to advocate for inclusion on websites around world. We’ve already seen a number of successes as a result of IPKO Foundation’s work to date, and the Digital Kosovo portal will enable us to build on this with the support of Kosovo citizens, including the very active online community here and abroad.” Meantime, Kosovo’s Deputy Foreign Minister, Petrit Selimi said pointed out the fact that the exclusion of Kosovo from many of the biggest websites in the world means that Kosovo citizens continue to be excluded from fully utilizing online services; a right taken for granted by people around the world.  “It also has a detrimental knock-on effect on our economy. Our lobbying efforts combined with citizen advocacy have successfully convinced websites such as Twitter, and more recently LinkedIn to include Kosovo, and this latest project is an important in stepping up efforts as part of our Digital Diplomacy Strategy” he said adding that  Digital Kosovo supports our citizens in making the case for including Kosovo across major websites, so that they can access the Internet for online shopping, business and travel bookings in exactly the same way as other Internet users around world.

The Norwegian Ambassador to Kosovo, Jan Braathu while speaking for the project said: “Via Digital Kosovo, we can all be digital diplomats and make use of our potential influence by demanding that Kosovo is recognized by companies on the internet. It is about more than just personal inconvenience. We see great potential in utilizing digital to support Kosovo’s statehood.” Speaking about the work of the British Embassy and British Council on supporting Kosovo’s Digital Diplomacy efforts, Myrna Macgregor from the British Embassy said: “Digital Diplomacy is changing the way we do foreign policy. With governments, businesses and charities online, we all need to have a strong digital presence. Internet recognition of Kosovo is of huge practical and symbolic importance and it is unacceptable that Kosovo still doesn’t appear on so many websites. Digital Kosovo is therefore a welcome initiative, which will enable Kosovo’s web-savvy youth to become advocates for their country’s online inclusion.”

Over 70% of Kosovo’s population is under the age of 30, so Kosovo is a digitally “switched on” nation with Internet penetration and usage similar to Europe-wide and global norms; internet penetration based on the number of users is 76.6%.

Facebook is the most popular social media platform in Kosovo – used by approximately three-quarters of Kosovo’s Internet users. Whilst users can select Kosovo as a location, Facebook has not recognised Kosovo as an independent country.