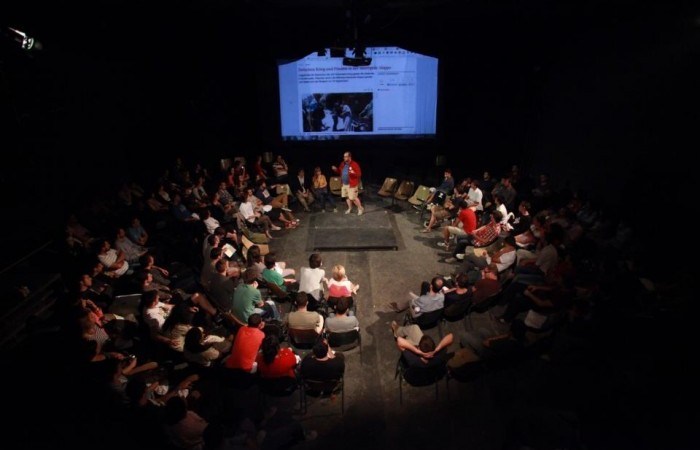 The second season of BarCamp started with a great success. Around 130 people participated on the seventh BarCamp organized in Prishtina. Oda Theater for one more time was the meeting point where people had the opportunity to hear interesting stories and talk to the main actors of these stories. From the comments from the audience, this BarCamp was estimated to be one of the best organized before. Many people participated in the discussions without hesitation and most of BarCamp consisted on discussions. Taulant Ramabaja, Vjollca Çavolli, Korab Ahmeti, and Vedat Xhymshiti were the key speakers of this round.

Being organized in the eve of AppCamp, BarCamp Prishtina was the right place for Taulant Ramabaja to present the project which was being implemented by Ipko Foundation. During his presentation Ramabaja represented the idea behind the AppCamp, what it is, how to sign up and why it is important to take part. His presentation was followed by an open discussion.

Speaking on the role of executive director of STIKK, Cavolli has started up with a personal experience, followed by the story behind the STIKK, its mission and the ways through which students could benefit from it. She talked about how to find internships and employment, to take part in conferences, and to get in contact with the local ICT companies/community via STIKK. She also talked for her personal experience as an interested woman on tech in Kosovo. She gave some personal advises to women who are interested on tech. Çavolli was the first speaker on BarCamp who made a female from the audience to make a comment.

“Nobody thought we could do this here, we did it better than anybody else in the world.”  This was impressive enough to make the audience applause and get emotional. As a project coordinator and local founder of Kosova Cap Project, Ahmeti talked about the story of the Cap Project around the world, its mission, how and why it started in Kosovo, problems encountered, personal reasons for taking part, achievements (50 wheelchairs donated), the high participation of people, the use of social media and the way they organized their team around Kosovo.

As he just got back from Syria as one of the few reporters actually in there, Xhymshiti started up by telling his personal story, how he got into war photography, what it is like, what has happened to him during his work, what technology he uses, what technology has saved his life, how he gets internet around the world (satellites), how it has gotten cheaper, and how he utilizes Facebook and Twitter during his work (among only a few reporters who do). His speech was followed by an open discussion.