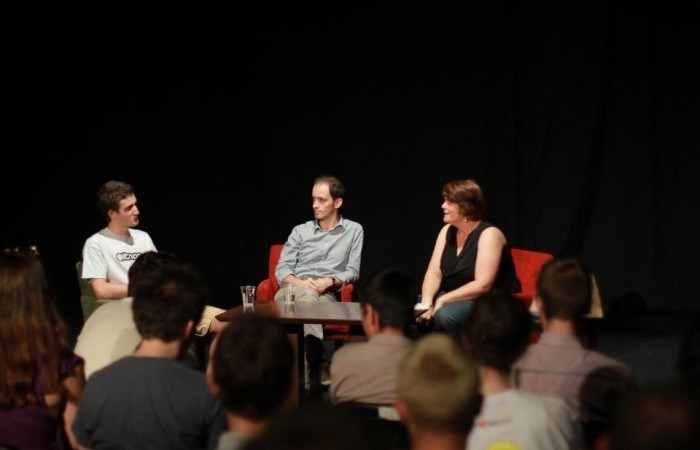 After organizing two outstanding meetings in Prizren and Mitrovica, BarCamp continued its activity in Prishtina. Organized, as usual, in the spirit of an informal conference, this edition differed from others not just because of the speakers, but also because of the interactivity that it raised. Organizers decided this time that a debate with speakers would be the best thing for the audience.

More than 50 people gathered in Oda Theater to hear outstanding life stories from Teresa Crawford and Kushtrim Xhakli, and they had the chance to talk and ask them what they found most interesting to know.

● Teresa Crawford: A story of success

Being one of the co-founders of IPKO, Teresa Crawford brought at BarCamp Prishtina interesting and impressive history on the creation of IPKO. She was focused to bring to the audience her history and personal experience in Kosovo since 1998. She also spoke about the process of creation of IPKO Foundation, the idea behind it, and the success that this foundation reached during the years.

Crawford mentioned her future plans, and she also gave some advices to the audience related to new company creation.

Known in Prishtina as one of the most successful Albanian entrepreneurs who works abroad, Kushtrim Xhakli was the other side of this thriving BarCamp. He brought to the audience his personal story as entrepreneur since the end of war, including his departure to Baltic, meetings with investors and friends, the energy that he has invested in the company, and his goals. He also gave some advices to the audience related to entrepreneurship.

This was the last BarCamp of the first season.