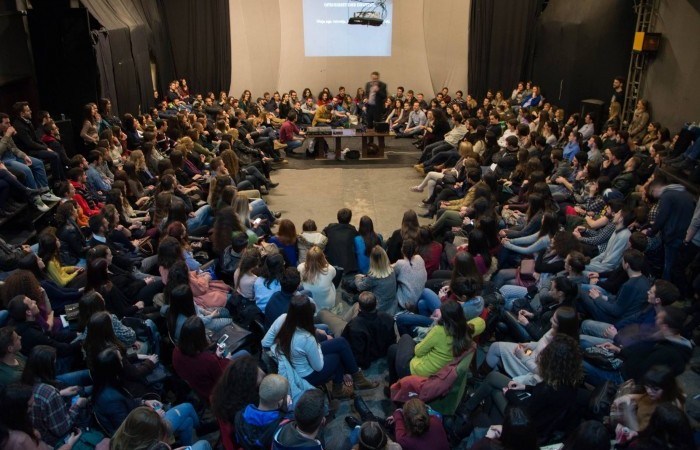 The heavy door at the entrance of Oda Theatre opened way too many times as hundreds of participants arrived at the scene. Down the stairs, a cordon of enthusiastic community members waited in line to enter the familiar setting of Oda. A warm environment filled with sarcastic warnings awaited their arrival, as a joyful mixtape of house and deep house music made the participants feel like home (pun intended). The scene was set for talks on sarcasm to begin.

All of us use a form of sarcasm in one way or another. Besides its healthy effect on our brains, sarcasm is also a good method of portraying irony and mocking problems, events, and other vital aspects of our daily lives. Sometimes, sarcasm aids our attempts to mock useless arguments. How have our speakers used sarcasm in their daily lives and professions? – we asked. The speakers answered.

Dardan Islami started his story off by showing how it is like to be a stand-up comedian. Prishtina, as he stated, has always had an authentic audience that complied with the level of sarcasm that Dardan used, although, as he pointed out, it is the ones living abroad that are mostly affected by it. “The greatest satisfaction that this profession gives me is hearing my own (sarcastic) words from people in the streets and contemplating the effect that they have had on them,” said Dardan.

Valon Maloku disclosed how he began his profession years ago. After being told by a teacher that cucumbers contained 96% water, while humans around 60%, a young Valon argued that, consequently, humans must be 57.6% cucumbers. While sarcastically mocking his presentation design, Valon showed some of his work, including poetry and wordplay, as the audience was left amused. His advice for every sarcastic person out there was to use oneself as the subject of sarcasm and try not to offend or degrade someone’s dignity.

Visar Arifaj began his talk by comparing sarcasm with chili pepperoni – you know your mouth is burning, but the resulting satisfaction overcomes it. Visar went on to explain how the idea for starting “Partia e Fortë” initiated and the manner in which they mocked the mainstream billboard ads of other parties during the electoral campaign, as well as their promises to create an inflated number of job openings. WIth a smooth transition from argument to argument, and story to story, Visar answered plenty of sarcastic questions from the audience.

And as this edition of BarCamp Prishtina came to an end, the audience slowly went towards that heavy entrance (or exit) door, but now with its weight surpassed by the amusement they enjoyed. After all, they did get warned!

Until the next edition, keep your minds healthy and fresh with adequate doses of sarcasm.