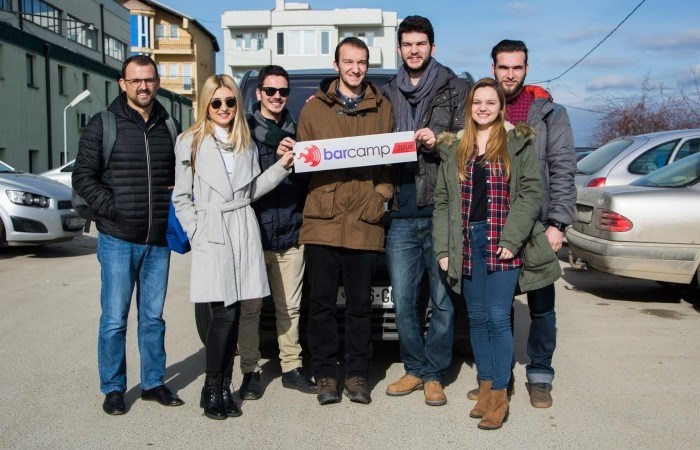 BarCamp Bus returned for the second time this December in Skenderaj and Vushtrri. Although it was held in a small environment it was very cozy. The audience of this BCBT were mostly young people who were present for the first time in an event such as BarCamp Bus.The participants were very active asking questions occasionally, at the same time very curious and interested to hear presentations from the speakers of this edition of BCB.

The second edition of BarCamp was organized by IPKO Foundation in cooperation with Public Youth Center Skenderaj (PYCS) and the NGO Kult Studio in Vushtrri.

As always the purpose of BarCamp Bus was to inspire the participants and show to them how the interaction of education, work and dedication have produced beneficial results for the guests of BCB. Speakers of this edition of were: Kadri Gashi, Mates (Stand Baqiyah & Noli Mati) and Dea Mulolli.

Kadri Gashi: Project coordinator of young Men Initiative “Klubi Bonu Burrë” which promotes the message to change some negative phenomena in Kosovo society and fights gender stereotypes. Gashi shared with us his life outside the profession, professional experience, challenges, successes as well as his experience so far with Iniciativa e Burrave të Rinj “Klubi Bonu Burrë” in Kosovo. The club BonuBurre until now has managed to reduce significantly the opinion that “Man is a physical strength.”

Mates (Qendrim Bakija & Noli Mati): Co-founders of the design company Mates shared their experience about what it’s like to be a new entrepreneur in Kosovo. They explained to us how they came up with the idea of creating Mates, which have been the major challenges in the process of building the company, the reasons that have inspired them and what kept them persistent to continue and to seek success. “As young people we are trying to make a difference in our hometown Gjakova, and to create a new spirit in Kosovo” .Q & N

Dea Mulolli: Member and activist of non-governmental youth organization Prosperity Initiative in Kosovo-PIKS which aims to empower kosovarian youth through the implementation of different projects. During her presentation Dea shared with the audience interesting experiences and informed us more about the activities of PIKS. Kosovo Model United Nations Academy is the largest project of PIKS organization which promotes critical thinking, activation of youth in decision-making, and the integration of marginalized groups. This non-governmental organization is also working on several new projects as Science for Change and Lokalizo which will be expanded soon. “No matter who we are or where we come from only with commitment we can succeed, therefore I invite you to take the initiative to make changes” DM

The idea of this edition of BarCamp Bus was to encourage the participants through presentations and discussions in order to turn their ideas into reality and to achieve successful results, no matter in which city they live. Hope we did it! ?