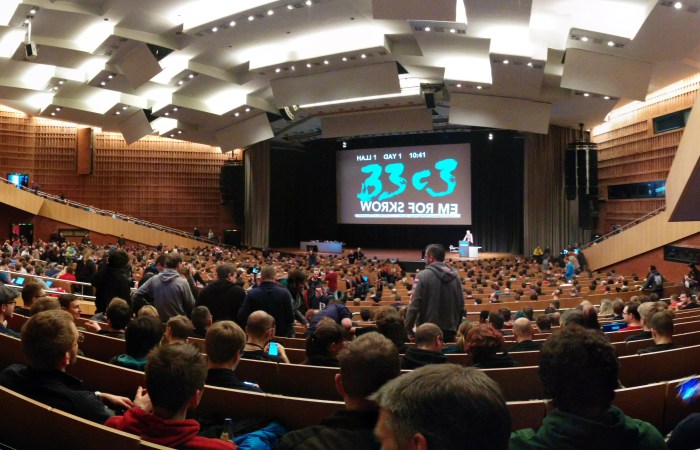 In times when everything was covered in festive colors, and everyone was dealing with final conclusions, calculating pros and cons of their passing year and planning the one to come, we were given a chance to postpone ours. On December 27th, thanks to the support of IPKO Foundation, we traveled to Germany to attend the 33rd Chaos Communication Congress (33C3).

Taking place in the beautiful city of Hamburg, CCC – Europe’s leading hacker and tech community conference with over 12 thousand participants from all over the world, gave us the opportunity to attend a large variety of amazing talks and presentations on privacy, surveillance, space, gaming and much more. We met with the most moving activists and communities of the respective fields, hence, establishing new relations with new fellow hackers.

Despite many major and creative conferences we attended in Kosovo, region, and around the world, CCC yet stood there to amaze us by being uncommon, fun, unique in its way and so brainy. Chaos, the name says it after all. With an almost 24h lasting schedule – 8AM to 2:30 AM (yes after midnight) talks, in-house disco, all the different hackerspace booth tables and creative projects displayed in the hallways, CCC had just enough going on to satisfy anyone’s interests.

CCC was made possible by over 2000 registered volunteers called Angels, who took care of everything, from the semi-open spaces with clusters of tables, encrypted Internet connection, live streaming, live talk narration, and up to the GSM and wireless telephone systems providing free phone calls internationally. Four big halls on the first floor, assemblies full of screens on black backgrounds and endless lines of code, blinking lights, robots and other electronics, you get the idea!? Edward Snowden was there too, well, as live as he could get on the big screen. And all the free stikerzzzz!!!

Talks and sessions were half of the fun. Who would have thought we’d meet DokuTech speakers there, Software Freedom Kosova speakers, OSCAL/OpenLabs fellows from Albania, and friends from KIKA hacklab of Skopje. Belgrade hacklab was there too, Mitch Altman who helped us kickstart Prishtina Hackerspace, Pirate Party friends across Europe, C-Base Spacestation members, Mozillians, Fedora contributors, you name them.

“Works for Me” – 33C3’s motto this year was something to get you think: does a system that only works for some people actually work? Is “works for me” good enough? Or should we be trying to make what we make work for everyone?
Though, today’s access to information on the Internet is sometimes considered to be our windows to all the possibilities out there. Attendance at the CCC left us much to desire, surprising us with creativity, all the ways we can use technology for good, but most importantly left us a message, a reminder that we can work to remake the rest of the world in little ways during the other 51 weeks of the year.